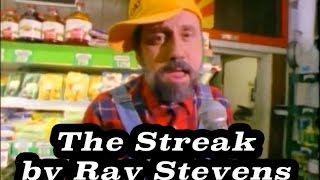 On this day in 1974 “The Streak” by Ray Stevens began it’s 3 weeks at #1 on the Billboard Charts. Capitalizing on the streaking craze that was going on Ray Stevens known for his novelty hits made this one his second #1 “Everything Is Beautiful” hit #1 in 1970. I was on a trip down south with my grandfather around this time in 1974 and all the radio played was “Band On The Run” and “The Streak.”