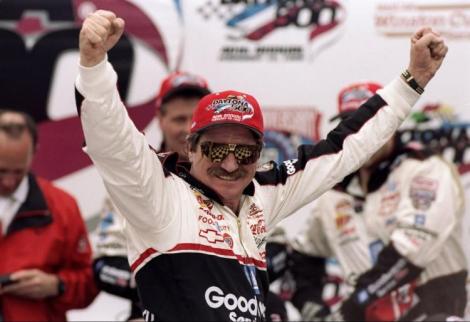 On this date 16 years ago- Sunday February 18th, 2001 NASCAR legend Dale Earnhardt was killed on the final lap of the Daytona 500. His car collided with Ken Schrader’s car and then went head into the wall on the final turn. Watching the race it immediately felt like a serious accident. Earnhardt’s teammate Michael Waltrip would win the race and the way he was acting and the way the announcers of the race were acting- kind of sent out bad feelings Earnhardt’s son Dale Jr finished second in the race.. They signed off that day without saying anything. I remember taking a nap and waking up and when I was signing on to the internet- and going to the ESPN site I feared a headline- which I immediately saw “Earnhardt Killed.”

Dale Earnhardt won 7 NASCAR Winston Cup Championships- a record he shares with The King- Richard Petty and current driver Jimmie Johnson. Earnhardt won 76 Winston Cup races. He was an aggressive driver known by his nicknames “The Intimidator”and “Ironhead” He was 49 at the time of his death. He was a member of the first class inducted into the NASCAR Hall of Fame.