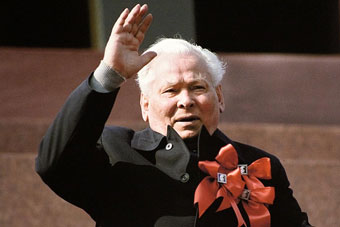 On this day in 1984 Konstantin Chernenko became the third General Secretary of the Communist Party in the Soviet Union in a period of fifteen months. First off longtime General Secretary Leonid Brezhnev died on November 10th, 1982 at the age of 75 after a long illness. He was replaced by the former Chairman of the KGB- Yuri Andropov. Andropov would served for 15 months in which he was a dying man the entire time. Andropov, drops off the scene on February 9th, 1984 at the age of 69. I am shocked when I saw in doing this research that he was only 69. He looked OLD.  So he dies and a few days later  Konstantin Chernenko is named the new General Secretary. Chernenko was in his early seventies. About the only thing I can recall about Chernenko is- the Frankie Goes To Hollywood video for the song “Two Tribes” with him and President Reagan wrestling each other. Chernenko was a sick man and he dies thirteen months later at the age of 73 on March 10, 1985. The Soviets then decide they can’t keep putting a dead man walking as their leader and name the youthful Mikhail Gorbachev a 54 year old- their fourth General Secretary in 2 years and 4 months.

I remember during all this time the most unfair criticism I think I’ve heard a president take. This was still during the Cold War, and critics of President Reagan were knocking him for not having a summit meeting with his Soviet counterpart. How could he? They were all old sick men who kept dying off. He would of course meet with Gorbachev. Gorbachev still alive at 85.