Oakland. I have to admit I actually like the Raiders. I grew up watching the Raiders; I liked the way they played ball, and I liked the way that guys went there and reclaimed their careers. Unfortunately, gone are those days of Madden, Flores, and even Gruden. The Raiders last Super Bowl was the blowout loss to the Tampa Bay Bucs in 2003. That was also the last year the Raiders made the playoffs.

Al Davis made some very questionable hires with Norv Turner, the return of Art Shell, the forgettable Lane Kiffen etc. Hue Jackson was let go too soon. How he led that team to 8-8 was just shy of a miracle.

I like Dennis Allen. I hope that the team responds this year and makes a decent showing. I hope that Al Davis cannot phone in the pick from beyond the grave.

To say the Raiders need help is a bit of an understatement. They have acquired Matt Schaub, who should be a serviceable quarterback for now (quiet Texans fans). Everyone knows that Schaub is not the future.

If I were in charge of writing a name on the draft card, it would be OT Jake Matthews – Texas A&M. If Cleveland passes on Johnny Manziel he could be the pick, also could be Blake Bortles. But….

But this is the Raiders and the pick will be Derek Carr – QB – Fresno State.

Carr has upside. He has been around the NFL, being former number one pick David’s younger brother. Not sure if he has the same confidence issues. 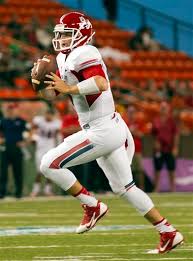