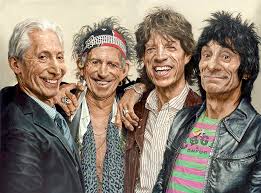 The Rolling Stones recently have been celebrating their 50th anniversary. I saw a couple weeks ago that ITunes had 2 collections up that covered The Rolling Stones from the first album to the last. I am generally a completest-but while I do own the classic albums from The Rolling Stones and a few of their stinkers from the past 30 years, I did not have them all. I now have everything from The Rolling Stones and for the past few weeks have been listening to them. When I listen to everything an artist/band has put out I always start with the first album- listen to each album twice and then move to the next one. Right now I am up to “Emotional Rescue” which I had bought when it came out over 30 years ago. I remember it was a big disappointment coming after the superb “Some Girls.”

What is my favourite song by The Rolling Stones? I know my two favourite are 1- Tumbling Dice 2- Dead Flowers. After that it becomes difficult. A lot of great songs by The Stones. Recently Rolling Stone Magazine put out a special issue on The Stones and ranked the 100 Best Rolling Stones Songs {Gimme Shelter was their number one.} I also found online Paste Magazine’s Top 50. I will attach that article below.

I had always maintained over the years that I preferred The Who to The Rolling Stones. After the past 3 weeks of intense Stones listening I must say I have changed my mind. As great as The Who were- Stones are better. Of course no one will ever touch The Beatles as my all-time favourtes.