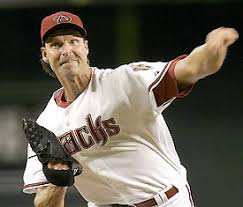 The Greatest Athlete To Wear #51 is Randy Johnson.

It is hard not to pick Dick Butkus- when I think of #51 Butkus comes to mind first but looking at the body of work in a career there is no doubt in my mind Randy Johnson has to get the nod.

Notable #51’s- Dick Butkus was The Monster of the Midway. His career was shortened by knee injuries but he was a dominate defensive player in the 1960’s. Hard not to put him at number 1. In baseball there have been some outstanding #51’s- Icharo is one of my favourite players ever. Bernie Williams was an outstanding player for the Yankees. One of those stars who was not quite a Hall of Famer I don’t think. Trevor Hoffman was one of the great closers of all-times. Willie McGee was a fine player for the Cardinals and always fun to watch. In football-Randy Cross was an all-pro with the 49ers during their Super Bowl run. Bryan Cox was a fine linebacker for a dozen seasons.

The Greatest Athlete To Wear #51- Randy Johnson. Randy Johnson won 5 Cy Young Awards, was a 10 time All-Star. He pitched 2 no-hitters-one of them being a perfect game. He led the league in strikeouts 9 times and in ERA 4 times. He won 303 major league games and his first major league season wasn’t until age 26. One of the greatest pitchers I’ve ever seen. Dominating.