40th POTUS Ronald Wilson Reagan was born on this day 1911.

1. Ronald Reagan was born on February 6th, 1911 in Tampico, Illinois. The Reagan’s lived in a series of towns before settling down in Dixon, Illinois in 1920. Ronald had a brother Neil [Moon} Something that many believe had a lot to do with Ronald Reagan’s personality was that his father was an alcoholic. Throughout his life it would be said that few people really knew Ronald Reagan. That there was always a part of him that he kept to himself and that had to do with growing up with an alcoholic father. As a boy he acquired the nickname “Dutch.” Reagan would be a lifeguard for 7 years and save 77 lives on the Rock River in his late teens-early 20’s.

3. Ronald Reagan was a successful movie actor from 1937 until the 1960’s. He was known as the Errol Flynn of the B-Movies. He was successful but never a top star. His most famous movie was “Knute Rockne All-American” where he played the role of George Gipp. The best movie he made was probably his role of Drake McHugh in  movie King’s Row. He had the most success early on in his career. He served as president of the Screen Actors Guild from 1947-52 and again in 1959. 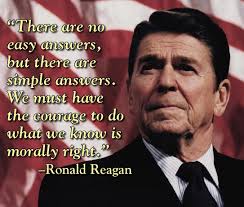 4. As his acting career faded Reagan became more involved in politics. He had grown up an FDR Democrat and would stay a Democrat until the early 1960’s. Over the years he lost his enthusiasm for Democratic party policies. After meeting and marrying his second wife Nancy Davis he continued his shift towards conservative views. Dutch Reagan always said he didn’t leave the Democratic Party-it left him.

5. I was 19 in 1980 and when I went to vote on Election Day I cast my first ballot enthusiastically for Ronald Reagan.  I grew up in a democratic household. But 4 years of Jimmy Carter turned me into the black sheep of the family. I was always interested in politics I remember in 1968 watching the conventions at age 7. I wanted Hubert Humphrey to beat Nixon. That election probably turned out for the best. I don’t think The Hube would have been any better than Nixon.  Anyway- when Reagan got his campaign going for 1980- in watching the debates early on Reagan became my man. I voted for him again of course in 1984. I can’t say that in the 7 elections since that I’ve gone to the polls and cast my vote with any enthusiasm since. Reagan I am sure will always be to me what FDR was to my grandparents and what JFK were to my parent’s-MY PRESIDENT.

6. Reagan didn’t want to be president just to be president. He went into it wanting to accomplish some things. He didn’t have a lengthy list of things he wanted to accomplish. I think his greatest accomplishment was his role in the defeat of the Soviet Union and the Iron Curtain. When he talked of the Soviet Union and his strategy towards them being simple “We win, they lose” no one took him seriously. In 1980 Dutch Reagan was the only one who saw it coming. I thought it was a pipe dream. I admit I didn’t believe  it would happen. I thought the Soviet Union and the Eastern Bloc of communist nations would be there forever. It was a fact of life. You can’t say Reagan did it all on his own. The policies of POTUS before him added to the Soviet’s demise but I think Reagan should get a big share of the credit. We won the Cold War without firing a shot.

7. When Ronald Reagan was inaugurated as POTUS in 1981 he was 69 years 349 days old making him the oldest president at the age of inauguration. When he left office eight years later he was 77.

8. Reagan had three Supreme Court appointees. He placed the first woman on the Supreme Court in Sandra Day O’Connor, Antonin Scalia who is still on the court and Anthony Kennedy. His nomination of Robert Bork was rejected by Congress. He also in 1986 named William Rehnquist Chief Justice in 1986. Rehnquist had been appointed to the court by Dick Nixon.

9. Ronald Reagan died on June 5th, 2004 at the age of 93. He had suffered with Alzheimer’s disease the last ten years of his life.

10. Before being elected POTUS Reagan held only one other political office. He was Governor of California  from 1967-74. One advantage Reagan always had was his opponents never took him as seriously as they should have. They viewed him as a light-weight. When he was elected Governor of California, Governor Pat Brown didn’t take him seriously. He thought no way was this ‘actor’ going to be elected. He was in for a surprise.