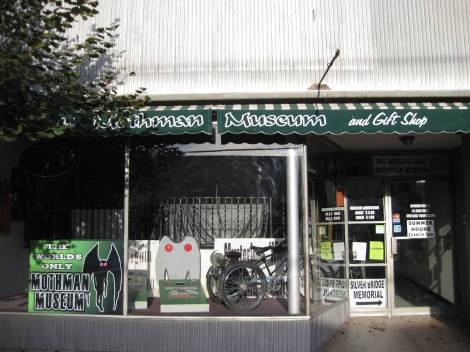 The Mothman Museum is located in downtown Point Pleasant, West Virginia. It is a busy place during the Mothman Festival weekend. The cost is $3 for admission to the museum. $3 is a good price. It is a nice little museum. They have stuff from the the Mothman Prophecies  movie, newspaper clippings from back in the 1960’s when the Mothman was around the Point Pleasant area, eyewitness accounts, they show videos of television shows that dealt with the Mothman. I’ve been to the Mothman Festival four years in a row {the Festival has been going on for 11 years now} I’ve stopped in at the Museum twice.

Below- is a picture of the map showing where people come from who have visited the Mothman Museum.