The Games of the XXI Olympiad were held in Montreal from July 17 to August 1st. 6024 athletes participated, 1246 of them were women. The total number of athletes was down because of an African boycott of the games. New Zealand’s Rugby team had played in South Africa. When The IOC didn’t kick New Zealand out of the Olympics 29 nations decided not to go. What the Olympics missed the most were the great African distance runners. 92 nations came to Montreal, 198 events took place in 21 different sports.

From the start Montreal had money problems and they fell behind in the building schedule. The games themselves though would be well organized and everything ran smoothly.

Queen Elizabeth II would open the games on July 17th. Two young athletes lit the torch-Sandra Henderson and Stephane Prefontaine [one of the favorites in the middle to long distance races in Montreal would have been the America Steve Prefontaine who sadly died a year earlier in a car accident in Oregon} 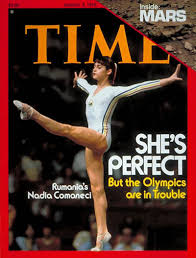 Some of the athletic highlights-  14 year oldNadia Comaneci of Romana in gymnastics scored 7 perfect 10.os. She would win 3 gold medals and take the world by storm. Alberto Juantorena of Cuba became the first runner to win both the 400 and 800 meters in the same Olympic Games. Lasse Viren the great long distance runner from Finland repeated as winner of both the 5000 and 10000 meters and entered the Marathon, a race he had never run before and finished 5th.

Bruce Jenner was one of the most hyped American athletes going into the games and he delivered winning the gold in the decathlon and setting a world record in doing it. The East German women won all the swimming events but two. What was odd about this is 4 years earlier they won no gold medals. Rumours of steriod use and other prohibitive drugs were years later found out to have been true. They were cheaters. The American men continued to dominate in the pool winning gold in all but one match. Overall in swimming 21 of the 26 events had world record times.

Track and Field had a first- Miklus Nemeth from Hungary won the javelin. His father Imne had one the Hammer Throw in the 1948 Games. They would become the first father-son combination to win gold in  track and field.

The medal count- The Soviet Union came out on top again with 49 gold and 125 total. United States second with 34 gold and 94 total. Third place was East Germany with 40 gold and 90 medals. West Germany 4th with 10 gold and 39 total and coming in 5th was Japan with 9 gold and 35 total medals.