Dr. Hunter S. Thompson, the father of “Gonzo” journalism was born on this day in 1937. Hunter Thompson is my favorite writer. His first book was “Hell’s Angels” in 1966 based on his experiences with the motorcycle group. His most famous work came in 1971 “Fear And Loathing In Las Vegas” a great and hilarious book.

My favorite book of Hunter’s and one of my 5 favorite books of all time is “Fear And Loathing On The Campaign Trail ’72” Hunter’s reporting on the ’72 election for Rollling Stone magazine. I read this book every election year [and sometimes in between} the book is insightful and the funniest book I’ve ever read.  I’ve probably read this book a dozen times {along with Jim Bouton’s “Ball Four” the books I can read over and over again} He wasn’t a Nixon fan and that shows through in the book.  In 1979 Hunter released “The Great Shark Hunt” a collection of his magazine articles  etc from over the years.  This in my opinion is a turning point. Up until 1980 Hunter’s work was constantly brilliant. After that his work became very spotty.

In 1980 Bill Murray starred as Hunter in “Where The Buffalo Roam” I like the movie but it received mixed reviews. Hunter began struggling with drugs and alcohol abuse.  He became more reclusive and wrote less and less. His life became more bizarre. It seemed to me like he was trying to live up to is image.

The great thing about Hunter Thompson was his writing. There have been many imitators of his style over the years but no one comes close to Dr. Thompson. In recent years several books of his letters have been put out which are brilliant.

Dr. Hunter S. Thompson committed suicide in 2005. He was suffering from a number of health problems and didn’t want to continue to live that way. { I always thought that Dahli Lama looked like Hunter in Hunter’s later years.} 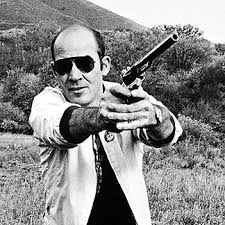 One response to “Dr. Hunter S. Thompson- father of “Gonzo” journalism-born on this day in 1937”