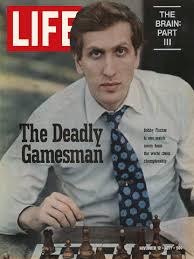 On this date in 1972- the World Chess Championship between the World Champion-Boris Spassky from the Soviet Union and Bobby Fischer from the USA began in Reykjavik, Iceland. The match would capture the imagination of the world. The first game was July 11 and the final game was on August 31st. The great Bobby Fischer won 12 1/2 games to 8 1/2 games-ending 24 years of Soviet dominance.

Even as an 11 year old I was fascinated with this match and with Bobby Fischer. This was during the Cold War. It was more than just a chess match. 29 year old Bobby Fischer became an American Hero for a brief period of time. A chess boom started in America also. It seemed like everyone was buying chessboards and playing the sport.

Bobby Fischer is a perfect example of the old line ‘there is a fine line between genius and insanity” Fischer would never defend his title. His life became more and more bizarre and he seemed to lose his sanity. He would make a comeback in the early 90’s against Spassky and beat Spassky again but chess experts were not impressed with his play. He wasn’t the Fischer of old.

Bobby Fischer would die at age 64 in 2008 in Reykjavik, Iceland. There are a few recent books that I would highly recommend. Last year Frank Brady’s “Endgame: Bobby Fischer’s Remarkable Rise and Fall from America’s Brightest Prodigy to the Edge of Madness” and 2005’s “Bobby Fischer Goes To War”-by David Edmonds and John Eidinow.

Last year HBO had a 90 minute documentary “Bobby Fischer Against The World” which was excellent.  Although it really has little to do with Fischer the excellent movie “Searching For Bobby Fischer” is one of my favorite sports movies. Bobby Fischer may have been the greatest chess master of all times and he continues to fascinate.

2 responses to “Match of the century: Bobby Fischer vs Boris Spassky began on this day 40 years ago”