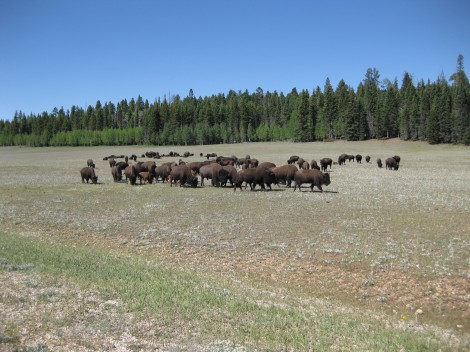 Right after we entered the Grand Canyon National Park we look over into a big field and we see our second buffalo herd of the trip. Of course we had to stop for 20 minutes and watch them eat. The car behind us-an interesting family. I overhead a 12 year old girl say she wanted to go out into the field and touch one, maybe ride one. I overhead an adult from that group way that the buffalo were ‘migrating” Alright. Anyhow both Mrs Postcard and I took dozens of pictures of the buffalo and watched them for a while before heading down to the north rim.