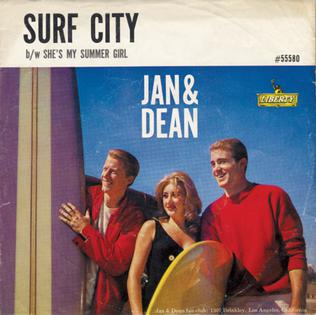 The Beach Boys Brian Wilson was hanging about with Jan Berry and Dean Torrence and played them “Surfin’ U.S.A.” Jan and Dean suggested he give the song to them to record but it was already slated for The Beach Boys- but Brian suggested this song he was working on but hadn’t finished- and was losing interest in- “Surf City.” Jan and Dean both added some to the song- it was recorded [ noted musicians Hal Blaine, Glen Campbell, Earl Palmer, Bill Pitman, Billy Strange and Ray Pohlman of the famous Wrecking Crew of studio musicians were the players on the single. “Surf City” was released and became the first surf song to go to #1 on the Billboard Hot 100 Pop Chart.