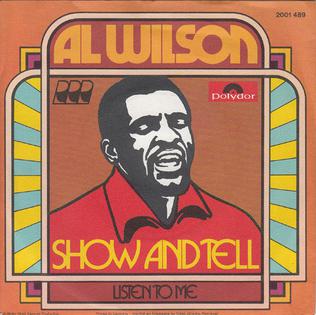 Al Wilson is kind of like the baseball journeyman player who plays in the league for years- an undistinguished career but he had his one moment in the sun  when he had one big World Series that everyone remembers when they hear his name- like Al Weis in the 1969 World Series with the Mets or in the NFL Tim Smith and his big Super Bowl with the Redskins before returning to obscurity. From 1968-76 singer Al Wilson had four Top 40 hits- but the one that is remembered is a #1 from 1973 “Show And Tell.” The song was written by Jerry Fuller and first sung by Johnny Mathis in 1972. The Mathis version went to #36 on the Easy Listening singles chart- it wasn’t until the next year -with Al Wilson’s version that the song exploded. The single spent a week at #1, sold 2 million copies and was named by Cash Box as #1 single of the year.