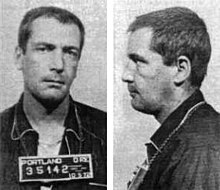 Gary Gilmore a double murderer in Utah- gained a lot of media attention in the mid 70’s when he demanded to be executed by a firing squad. He got his wish and was executed January 17, 1977. Gilmore had requested that some of his organs be used for transplant purposes- his corneas were used for transplants- which inspired this song.

Norman Mailer wrote a book “The Executioners Song” which won the Pulitzer Prize and was later made into a movie starring Tommy Lee Jones as Gilmore. Gilmore’s brother rock music journalist Mikal Gilmore also wrote a fine book about the family- “Shot In The Heart” which is well worth reading.

The Adverts were short lived- they formed in 1976- released two albums and disbanded in 1979. “Gary Gilmore’s Eyes” was their most successful single.