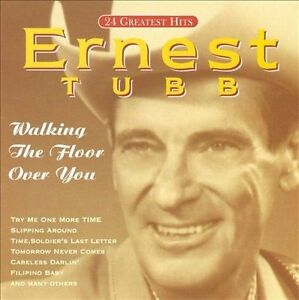 Three Chords And The Truth: Essential Country Music Songs- “Walking The Floor Over You”- Ernest Tubb. “Walking The Floor Over You”- Ernest Tubb’s signature song from 1941- is said to be the first honky tonk song. Written by Tubb the single sold over a million copies back in the early 1940’s. The original version was pretty basic- Tubb singing and on acoustic guitar and Smitty Smith on electric guitar. He would re-record the song a number of times over the years and it would be a much covered song- from great artists like Bing Crosby and Glen Campbell to lame Pat Boone and many in between. In the early 70’s Tubb re-recorded the song with Merle Haggard. I’ve been listening to Tubb the last couple days- will write more on him tomorrow. Below is the original “Walking The Floor Over You” from 1941.

22 responses to “THREE CHORDS AND THE TRUTH: ESSENTIAL COUNTRY MUSIC SONGS: “WALKING THE FLOOR OVER YOU”- ERNEST TUBB”