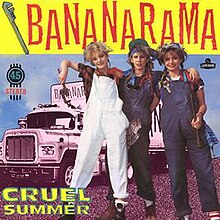 The Sounds of Summer- Day 56 of 95 – “Cruel Summer”- Bananarama. Bananarama only had three Top 40 hits in the United States- which kind of surprises me I thought there were at least a few more- but they made them count- all three made the Top 10- “Venus” #1, “I Heard A Rumour” #4 and “Cruel Summer” #9. “Cruel Summer” from 1983 was their first Top 40 hit.  Summer gets great PR- as opposed to winter- which most people- where they get winter – seem to hate. Anyway- August is the worst even as a kid I didn’t like August- it was hot, by that time I had done whatever I had planned to do during the summer, school was coming up- it just seemed like a cruel month. “Cruel Summer” is kind of in the category of a song I played back in late June- “The Other Side Of Summer” by the immortal Mr. Costello. Summer isn’t always as carefree and wonderful as The Beach Boys made it out to be.