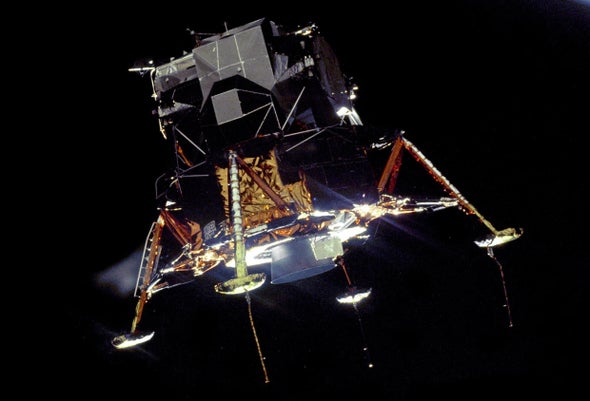 At 4:17 pm in the afternoon EDT astronauts Neil Armstrong who was at the controls as the pilot- and Edwin “Buzz” Aldrin- landed the Apollo 11 lunar module-“Eagle” on the Moon becoming the first human beings to land on another world. The other astronaut on Apollo 11 Mike Collins stayed aboard “Columbia”- the command module while Armstrong and Aldrin were on the Moon. After leaving Columbia in the Eagle- they had a two hour descent before they touched down in the Mare Tranquillitatis- 9.3 miles south of a crater called Sabine D- which would be renamed Collins crater. History had been made. President Kennedy’s seemingly impossible goal of sending man to the Moon by the end of the decade was accomplished. What was left- exploring the Moon, lifting off from the Moon which had every at NASA nervous and then docking with Columbia and the return to Earth.

This was one of the most memorable days of my life- I was eight years old, I had become a big fan of the Apollo missions with Apollo 7 mission. I was glued to the television for most of the Apollo 11 coverage- as soon as I would wake up in the mornings. The afternoon they landed on the Moon my family had gone to visit friends and we watched the landing there. We wanted to get home in time to watch the moonwalk- I still recall walking out of their house to go to the car and my parents friend Gene pointing up to the Moon and saying ‘Isn’t it hard to believe we have put two men up there.” 50 years later I still find it hard to believe. We got home well enough in time and I was sitting in front of the television when Neil Armstrong and then Buzz Aldrin left the Eagle for a walk on the Moon’s surface.Incredible.