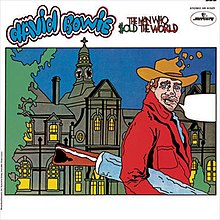 “Time To Play B-Sides”- “The Man Who Sold The World”- David Bowie. Over the years I have run into a few people who think this was written by Nirvana. While they did cover it on their it extremely well on their Unplugged In New York album- it is a David Bowie song. It was the b-side to “Space Oddity” in 1973. “Space Oddity” went to #15 in 1973 while the b-side failed to chart-but it still became one of Bowie’s classic songs and for the longest time I had just assumed that it was a hit also.

I always liked Bowie but with his death three and a half years ago I came across a deeper appreciation for his career. Where I had considered him a B level rock star- I have changed my mind- he was an A level. His 70’s work was as good if not better than anyone during that period and I believe his past 70s work is underappreciated- simply because it wasn’t as great as his 70’s period.