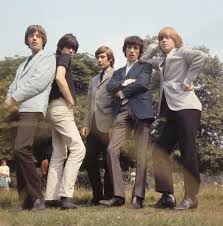 The Rolling Stones Song of the Day is Stray Cat Blues. Stray Cat Blues is the 8th song on Beggars Banquet and was written by Mick Jagger and Keith Richards. The song is about hooking up with an underage groupie. Mick has said that the writing of the song was inspired by The Velvet Underground’s- Heroin. Prominent in the song are Nicky Hopkins piano, Brian Jones on mellotron, More blues-rock from The Rolling Stones on this album.