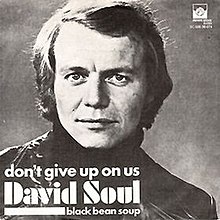 Han’s Worst Hits of the 70’s- the year was 1977 and actor David Soul from the television show Starsky and Hutch decided to return to one of his early career choices- that of a singer. Don’t Give Up On Us- was written by songwriter Tony Macaulay. It would be a big hit-going to #1 in the United States, United Kingdom, Canada, Ireland, New Zealand and Australia. How did this happen is the question? His singing voice is so weak. Even Soul would be embarrassed by the song- in the early 2000’s he recorded it again after hearing it sung in an elevator by Owen Wilson from the movie of Starkey and Hutch because he was embarrassed by it.  Soul would have other hits in the UK but this would be his only Top 40 hit in the US.  Starsky and Hutch ended in 1979 and Soul sort of disappeared from view. Which one was he anyway- Starsky or Hutch? My sister loved the show but I don’t recall watching it. She also had the 45 of this song. I wouldn’t classify this song as one that annoyed me- it was just a weak song from a fellow who couldn’t sing very well. The song was clearly a hit due to his having a hit tv show at the time. Could it have stood on its own without the celebrity connection? I don’t think so.