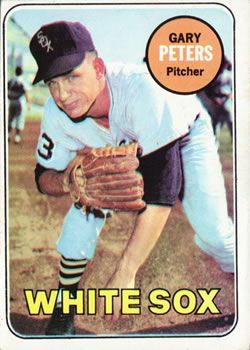 Gary Peters was a very good pitcher in the 1960’s for the Chicago White Sox- so good that in 2000 when the White Sox named their All-Century Team- Peters was one of the nine pitchers to make the team.

The path to the major leagues for Peters was a long one. In high school he was mainly known as a great hitting first baseman who pitched some. When the Chicago White Sox signed him he began as a first baseman, moved to the outfield before becoming a pitcher. In four consecutive seasons 1959- 1962 he would be called up to the White Sox but for only a brief cup of coffee each season. In the four years he pitched only a total of 21 innings for the White Sox, the rest of the time was spent in the minors and management was beginning to look at him as a pitcher who was good at the high levels of the minors but lacked something to succeed at the next level.

1963 was the critical year for Gary Peters. He was now twenty-six years old and was out of options. That winter playing winter league ball Peters was pitching in relief a sure sign that his future was in doubt. In winter ball his fastball started to come around.  Peters had to make the White Sox out of spring training that year of the team would have to place him on waivers. Back then they had a 28 man roster for the first month of the season before going down to the normal 25 man roster- this helped Peters break camp with the White Sox. He was pitching in relief at the start of the season and not doing all the great when he got his break. Juan Pizzaro was scratched from a start because of the flu and Peters went 8 innings giving up only 4 hits. He didn’t immediately join the starting rotation after that but he opened some eyes and by early June he was in the starting rotation for good.  Finally in his 8th professional season he had a breakthrough- and just in time. He would win the Rookie of The Year Award going 19-8 with a 2.33 ERA, 189 strikeouts in 243 innings. Peters would also finish 8th in the MVP voting in his rookie year.

1964 was another great year-in the off-season he worked on his curveball at his new Florida home and it payed off- he won 20 games for the only time in his career- going 20-8 with a 2.50 ERA. He made the All-Star team and was 7th in the MVP voting.

Just when it looked like Gary Peters had hit his groove he had an off-season in 1965, bothered by a groin injury all season he went 10-12 with a 3.63 ERA. He would turn that record around to 12-10 in 1966 with a brilliant 1.98 ERA which led the American League. His win-loss record no real indicator of how good a season he had. The White Sox were one of the worst offensive teams in baseball that year and he got little support.

The White Sox would be in the pennant race until the end in 1967 and Peters was leading the way. He made the All-Star team that year and pitched 3 shutout innings in the game- striking out a few future Hall of Famers- Willie Mays, Roberto Clemente and Orlando Cepeda and a fella who should be in the Hall of Fame- Richie Allen. Peters went 16-11 with a 2.28 ERA. He finished 9th in the MVP voting. His prime years would be 1963-67 at age 30 he had his last exceptional season.

1968 is known as The Year Of The Pitcher- there is even a recent book by that name covering the 1968 season. You won’t find Gary Peters in that book- he had a rough season going 4-13 with a 3.76 ERA. Today a 3.76 ERA in an offensive era would be a pretty good one but in 1968 when Bob Gibson would have a 1.12 ERA and Denny McLain would win 31 games it was a sub-par season. The next season would be Gary Peters last as a Chicago White Sox he went 10-15 with a 4.53 ERA. In the off-season he was traded to the Boston Red Sox where he would finish his career.

The change of scenery helped in 1970 as he went 16-11 with his new team with a 4.06 ERA and in 1971 his record wasn’t bad at 14-11 but his ERA continued to go up- this time to 4.37. In 1972 would be his final big league season at the age of 35. He would appear in 33 games but he had lost his spot in the starting rotation- only starting 4 games that season. He was released by the Red Sox and the following spring went to camp with the Kansas City Royals- didn’t make the team out of spring training and retired.

An important note on Gary Peters that I haven’t mentioned- remember he came into professional baseball not as a pitcher but as a first baseman and outfielder in the minors. He was one of the best hitting pitchers of his era.  His career totals 19 home runs and a .222 average. The only season he didn’t hit a home run was in his last season. He was used during his career as both a pinch-hitter and as a pinch runner. He had some big games as a hitter too-on July 19, 1964 he hit a pinch-hit two run home run in the 13th inning to win a game for the White Sox.  On May 5, 1968 he hit a grand slam in a 5-1 White Sox win.  We haven’t seen many great hitting pitchers in baseball like this in recent decades.