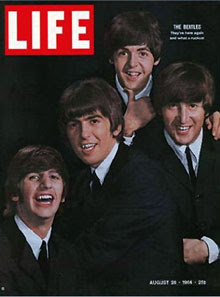 The Beatles Song Of The Day is “Tell Me Why.” “Tell Me Why” appears on The Beatles third album “A Hard Day’s Night” and also appears in the movie of the same name. “Tell Me Why” was written by John Lennon. John wrote it to provide and upbeat song for the concert scene in the movie. He viewed it as a knock off song- a girl group type song. John Lennon: vocal and rhythm guitar/ Paul McCartney: harmony vocal and bass guitar/ George Harrison: harmony vocal and lead guitar/ Ringo Starr: drums. The song was recorded on February 27th, 1964 at Abbey Road. Producer: George Martin.