With the 4th pick in our mock draft I have the Cleveland Browns selecting Johnny Football aka Johnny Manziel QB Texas A&M 5-11 207, Outside of the Jags there is no franchise as boring as the Cleveland Browns. They need a quarterback- and much more of course but I think they will go with Manziel- it will give the franchises fans some excitement. Will he work out? I have no idea? He could end up being their franchise quarterback or he could end up a flop. I doubt at this point that the Browns have any idea who they will select-but I think when it comes down to it they pull the trigger on Johnny Football. 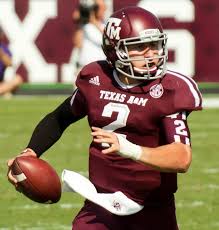