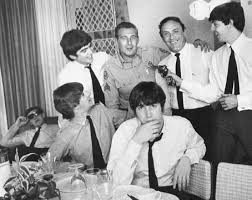 On this day in 1963 DJ Murray The K-on WINS in New York played “She Loves You” by The Beatles on the radio. It is believed that this was the first time a Beatle song was played on the radio in the United States. Murray The K would in 1964 refer to himself as “The Fifth Beatle” Murray Kaufmann died in 1982 at the age of 60.